Jerrel Wilson made other people aware of how important the kicking game was at a time when special times were not given special consideration. I’m prejudiced, but he’s the best punter I ever saw. He’ll go down in history as the best kicker in the NFL.”

Jerrel Wilson was a punter who spent 16 seasons as a professional, 15 of those with the Kansas City Chiefs, in the American Football League and the National Football League. He was selected to three AFL All-Star Teams and three AFC-NFC Pro Bowls. 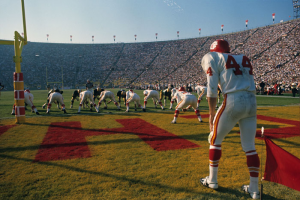 Wilson was elected to the Chiefs Hall of Fame in 1988.
Wilson was known for his high, booming punts that arched far down the field, potent weapons in the war for field position. Wilson earned the nickname of “Thunderfoot.”
The Southern Mississippi alum was the Chiefs’ punter for a team-record 15 seasons and is considered one of the best punters ever.
Wilson punted a Chiefs franchise-record 1,014 times during his career. His average per punt in his career was 43.6. He led the NFL in punting in 1965, 1968, 1972 and 1973. He was named to three Pro Bowl teams in consecutive years from 1970-1972.
Wilson once said of his own punting style, “The way I attack the football, every time I hit it, I try to bust it, unless I’m around the 50. Then I hit it high. Basically, my power comes from everything. I try to snap everything I have in my body—my hips, knees, everything.”